A person, living life, gathers knowledge from education and wisdom from experience. One meets people, becomes acquainted with the customs and ways of the world and, as this happens, one’s ideas change and so one changes—for the better, we hope, gaining tolerance and understanding and appreciation for the miraculous kaleidoscope that is our world.

That’s how things are supposed to work.

But there are other ways of changing a person by changing his ideas. By lies, by targeting those who don’t look like “us”—a difference of pigment, a variance of accent, a strange-seeming mode of dress or belief. By making such things objects of suspicion and not wonder, small-minded people who need a scapegoat on whom to vent their own hate and delusion can change the ideas of others and so mold and twist enough of a population to cause damage, dismay and, too often, bloodshed.

Every minority religion, group or culture has had to contend with the cycle of propaganda—manufactured lies scapegoating them as “the enemy” or “the whole reason behind our failures.” So it went with the scapegoating of the Jewish people from ancient times up through the pogroms of the 19th century, the Holocaust of the 20th century, and the alarming spike in antisemitic attacks in the 21st.

So it went with the “immoral” Irish immigrants of a century and a half ago, the “yellow peril” Chinese, and the “unwashed” Italians.

So it goes in our own time with the twisted hysteria engendered by lies and injected in the bloodstream of our nation that targets minority groups like Muslims, Asian Americans, Jews, Scientologists, Hispanics, LGBTQ, Native Americans and others.

Every minority religion, group or culture has had to contend with the cycle of propaganda.

It’s a familiar playbook: single out the “different” ones, the newcomers, as the cause of our troubles. Plant one lie, then another, then another, and watch the evil garden grow.

Fortunately, an individual occasionally rises above the smoke and flame, above his or her own inadequacies and fears, and makes our species look good. More often than not, such heroes spring from unlikely places.

Garden City, Kansas, a small backwater population not quite 30,000, has in recent decades become a haven for diverse communities escaping poverty, crime and oppression. Mexicans and Vietnamese have called Garden City home since the 70s and 80s. Refugees fleeing extremism and civil war in Somalia have become its latest arrivals.

Garden City had become a model of how a variety of races and faiths can live in peace under the same patch of sky, the newcomers fitting in seamlessly with white neighbors and friends.

Dan Day, an unassuming unemployed father of two struggling to make ends meet, was one such white neighbor—arguably the last person in the world you would expect to wear a hero’s cape. His story is chronicled in a hard-to-watch documentary released this past year, The Informant—Fear and Faith in the Heartland.

Day himself shrugs off any “credit.” As he puts it, “I’m not a perfect guy. I mess up like everybody. But I do have tremendous faith in God.”

And it’s possible that that faith got Day through the most difficult 15 months of his life—months in which he put himself and his family in harm’s way to save hundreds of Somali Muslims from what could have been the deadliest act of domestic terror on American soil.

As one Somali mother later told him, “You were sent by God.”

The FBI agents running him needed to fill in the blank on the form under “motivation,” and wrote down a one-word answer: Patriotism.

It all started one day in 2015 when Dan Day saw a poster he didn’t like at the library promoting hate against Israel. He took it and showed it to a friend of his who then invited him to a barbecue. Only it wasn’t just a barbecue. It was a recruitment meeting for the Three Percenters, an extremist militia group associated with violence.

Day then heard his library poster story inflated to the point of wackiness: Isis was recruiting openly at the local library, and they must be stopped. These Muslims in town are in on it, and they’re all no good.

Shaken, Day reported what had happened to the FBI, and before long, agreed to be an informant.

But Dan Day didn’t fit the template of your “usual” informant. He wasn’t a criminal seeking a break nor an ex-militia member seeking redemption. The FBI agents running him needed to fill in the blank on the form under “motivation,” and wrote down a one-word answer: Patriotism.

For the next 15 months Dan Day pretended to go along with the three men who called themselves “The Crusaders,” after the cross-bearing soldiers sworn to liberate Jerusalem from the “heathen” Muslims over a thousand years ago.

All told, because of Dan Day, we have well over a thousand hours of unrelenting, uncompromising evil exposed to the light of day.

He knew that if his secret was discovered, the group’s leader, Patrick Stein—who called himself “Orkin Man,” after the exterminator—wouldn’t hesitate to put a bullet through his head.

But the primary difficulty for this informant wasn’t the ever-present danger. It was the need to continuously pretend to admire his comrades’ spewings—to laugh at their bigoted jokes, to contribute to their plans.

Orkin Man brandished his gun as they drove unseen through Muslim neighborhoods, pointing it at children at play. “Look at those little roaches. They’re bringin’ them in by the planeload. F—kin’ goddamn cockroaches. If I could get ahold of some RPGs [rocket propelled grenades] I’d blow up every goddamn building. Boom.”

Had it not been for Dan Day, the FBI would have known nothing, and the nation’s worst incident of domestic terror would have taken place.

As summer wore on, a plot coalesced. Obtain or build a bomb and use it where it would do the most harm. The Somalis, a close-knit community, lived, worked and prayed together. What would be the best target? The mosque? The shopping mall? The apartment complex?

The one-story apartment complex was settled upon. It housed a hundred Somali families and had a neighboring mosque where hundreds worshiped.

Among the residents was a woman blinded as a teenager when terrorists set off a bomb in her native Somalia. Another was a new mother. Her baby boy was named Samir.

The time had come to recruit others. Members of other militias were told of the Crusaders’ plan to murder hundreds of Somalis, were told it was to happen the day after Election Day 2016, were told how the plan was to be executed.

No one joined them.

But not one militia group member so briefed contacted any law enforcement authority. Not the FBI, not local police.

Had it not been for Dan Day, the FBI would have known nothing, and the nation’s worst incident of domestic terror would have taken place.

The Crusaders stuffed their bomb with nails, razor blades, knives—anything to inflict maximum suffering. According to FBI research, such a bomb would have leveled an entire apartment building and killed everyone in it.

Ifrah Ahmed, a community leader, fled Somalia’s civil war as a child, then waited in a refugee camp for 17 years before coming to Garden City. She said the men’s level of hatred for total strangers is “beyond anything that my brain can comprehend. I had no idea that people could be so hateful—so bluntly hateful.”

When the narrator of the documentary asks Ahmed if this had shaken her faith in America, she answers: “For a moment it did. But then I realized that America is resilient. It’s more than those people who are trying to hurt us. There’s so much good people out there. Dan Day is one of the examples of what makes America great. He saw that humanity comes first and he saw that we were beyond what they had described… That we were not mere ‘cockroaches.’ He put his family, himself, in jeopardy for us.”

What we don’t know is what we would do if faced with an impossible situation like the one Dan Day was confronted with.

Day’s daughter described him as the sort of person who would be the first to pull over and help someone with car trouble. And his wife added, “We’re all bigger as a family because of it.”

The documentary concludes with the following caption: “The FBI is now conducting more than 2,000 investigations of domestic terrorism.”

We know where unfettered hate, goaded by those with an unholy platform, can lead. We know that vile ideas can take root, spread and, if not stopped, can lead to disaster. We know these things and are properly concerned about them.

What we don’t know is what we would do if faced with an impossible situation like the one Dan Day was confronted with.

Hate, on the other hand, requires no courage, no risk. A mob doesn’t ask for thoughtful consideration or dialogue or understanding.

Dan Day’s motive, as noted on the FBI form, was “Patriotism.” Patriotism is more than waving a flag. It is standing up for the ideals and principles of one’s nation and holding that nation accountable for any lapses in those ideals and principles. A patriot in America, then, has a large responsibility to uphold not just the greatness of our country, but to play his or her part in ensuring that those things that make us great—our freedoms, our tolerance and diversity, our insistence on human rights—are never compromised.

That is what makes a true patriot.

As Anthony Mattivi, the prosecutor on the case, said, “Dan Day is just an average guy who, when confronted with a situation that he didn’t want and he didn’t ask for, dug down deep and found the heart of a hero.”

How many more heroes are out there?

How many more heroes will we need?

KEYWORDS
ANTIRELIGIOUS HATE EXTREMISM FBI HEROISM ISLAMOPHOBIA PATRIOTISM
AUTHOR
John Evans
John Evans has written for theater and the big screen. His essays, fiction and poetry have appeared in several publications on the East and West Coasts.
THE STAND BLOG
HATE WATCH
Why Political Operative Ace Smith Is the True Loser in the L.A. Mayoral Race
HATE WATCH
Why the People of Los Angeles Are Disgusted by Ace Smith
HATE WATCH
Rick Caruso Campaign Manager Ace Smith Blocks Scientologists Speaking Out Against His Bigotry
FEATURED ARTICLES
RELIGIOUS FREEDOM
Why God Is Love and We Should Love All People of All Faiths
By John Evans
TOLERANCE
Faith Communities Come Together to Pay Tribute to Queen Elizabeth II
By John Evans 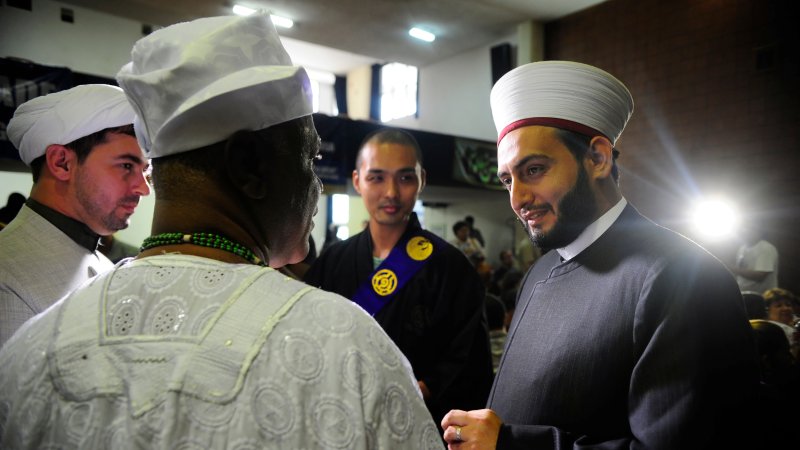 BLOG | TOLERANCE
Can We Make 2020 the Year of Tolerance?
BLOG | COMBATING BIGOTRY & HATE
Converting From Hate to Islam—One Man’s Journey Out of Darkness