I’ve done quite a bit of Scientology over the years.

I’ve read dozens of books, I’ve listened to hundreds of hours of lectures by L. Ron Hubbard, and I’ve studied and progressed to the highest spiritual levels available. So, when I hear lies about Scientology, I’m utterly unfazed. You can tell me Scientologists have tails and bunny ears or whatever, and you’ll get laughed at or ignored. I know that Scientology works for one simple reason: I have firsthand experience that it does. Not only has it worked for me, but I’ve had spiritual gains that I could never have fathomed before—so much so, you probably wouldn’t believe me if I told you them. And that’s okay. There are so many dead ends in the world that it’s easy to assume that Scientology must be another one. It just isn’t.

So, I essentially pay no mind to the haters that scream that the sun doesn’t really set in the West and that the emperor’s new clothes are magnificent. I’ve witnessed for myself where the sun sets, and I’ve seen the emperor and, well… he’s naked.

Honest people have a difficult time dealing with the fact that dishonest people exist. It boggles the mind that someone could be so twisted.

Indeed, lies about Scientology would be amusing if not for the fact that friends of mine come across—and get confused by—these fabrications. These friends haven’t read dozens of Scientology books or experienced the spiritual gains I have, so they have nothing to contrast the propaganda with—except for me, and I don’t seem like the ogre described by these bigots. So, they come to me to ask questions about what they’ve heard.

I had such an incident recently with a cousin who was flipping channels and ran across a hatemonger spreading outrageous lies about my religion. He was utterly aghast and we got into a lengthy discussion about all the trash he had consumed. (When someone has the audacity to just make up something about your religion, there’s not much you can say other than, “it’s a bunch of garbage.”) After a while, he calmed down, but couldn’t get past this one thing: why would someone lie like that?

It’s a question I’ve heard before. Honest people have a difficult time dealing with the fact that dishonest people exist. It boggles the mind that someone could be so twisted.

So I told him this story:

When I was eighteen, I was working the cash register of the family grocery store when a gentleman walked in holding a brown paper sack. He was wearing a sports jacket, nice jeans and a dress shirt and had a pleasant smile. He pulled out a six-pack of beer from his bag and explained that he had bought it from my dad earlier that day and asked if he could please trade it for a cold one. He seemed like a nice enough fellow, so I said “sure.”

Pops happened to walk into the shop just as the man was thanking me. As the man stepped out onto the street and into his car, pops asked me in his broken English and thick Arabic accent: “Why he thank you?”

I told him what had happened.

I was startled by his reaction. “What’s wrong with that?” I asked him.

Composing himself, he matter-of-factly explained: “It’s water,” implying that the man had drank the beer and refilled the bottles with tap water. I didn’t believe him—I felt I was a pretty good judge of character and was certain that that nice fellow wouldn’t deceive me like that. The man dressed as if he had a few bucks and had a sincere demeanor. My father was just being cynical.

“Go, take a look yourself,” he calmly replied, like a Yoda teaching a Padawan.

Here’s the thing about bad apples: they rarely look like the sinister characters we see in the movies.

I walked over to the fridge determined to prove him wrong. I grabbed the six-pack, twisted off one of the bottle caps, and poured the contents into an empty glass—water. The man had indeed conned me. It wasn’t a lot of money lost, but I was hurt and disillusioned. It would have felt better had the guy just snatched the beer and bolted out the door. It’s not that I didn’t know that dishonest people existed, but there was something about being lied to by someone I had decided was trustworthy that really stung. I grew up a bit that day.

My cousin laughed when I told him the story.

Trying to understand evil is not easy. L. Ron Hubbard stated that man is basically good, and that is true. But I see the goodness in people to the point that it has occasionally gotten me in trouble when I didn’t spot a knife hidden behind the back of someone I thought had a sweet face. Over time, I’ve discovered that, although man is basically good, it doesn’t mean that a few men and women haven’t flipped to the dark side. Not a huge revelation. Look at the world today. If everyone was expressing their basic goodness, this world wouldn’t be in the mess it’s currently in. Unfortunately, a few once-good apples have gone bad.

But here’s the thing about bad apples: they rarely look like the sinister characters we see in the movies. In life, they can be pretty, ugly, short, tall, funny, serious, stupid, or clever. You can even find them shopping for beer at mom and pop grocery stores, brandishing warm smiles and designer jeans. No, the only thing bad apples have in common is that they destroy things. And to pretend they don’t exist is asking to be knifed in the back. And the ugly truth is: a handful of these characters have aimed their hate at Scientology.

I don’t know of any new religion that didn’t face controversy. My goodness, Jews have been persecuted for ages, and Christians were thrown to lions—lions. And Muslims and other religions have fared no better. Whenever a new religion emerges, there are always vested interests threatened by the spiritual empowerment it represents to the people they’re trying to control or even enslave. As a matter of fact, many of the religions of the world are still under attack this very day, some thousands of years after their inception.

The irony is, despite all the attacks Scientology has sustained, it continues to grow at astonishing rates, with beautiful new churches opening regularly all over the world. Why? Oh that’s simple: because it works—brilliantly. As a matter of fact, if it didn’t work, the hatemongers and vested interests would simply ignore it. Believe me, that would save them a lot of trouble and expense. It’s the fact that it does work that makes it a target.

It would be great to live in a rose-colored world, if only the world was such a color. Maybe one day it will be. But as I’ve grown up, I’ve become aware of a few facts about life: the department store Santa Claus is just a hired actor in a Santa suit, and it was just good ole mom that left the dollar under my pillow, not the tooth fairy, and although the vast majority of people are good, honest people, as my father explained simply in his thick, Arabic accent, “some are just… liars.” 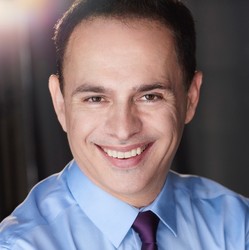