Highlighting the Difference: A Study of Warm Chocolate Chip Cookies

I heard a random news story this morning about the power of the smell of chocolate chip cookies. While this might sound like a leap, it put into relief a key difference between Scientology and what might be called “secular religious ideologies.”

A quick word of explanation as to what I mean by “secular religious.” In the broadest sense, religion deals with ultimate questions: Who are we? Why are we here? What happens when we die? But many materialistic ideologies, founded on the belief there is nothing beyond the physical, are in vogue today. (Or at least they have the healthiest marketing budgets.)

Thomas Szasz talked about this philosophy when he commented on the “therapeutic state” and pointed out that it “swallows up everything human on the seemingly rational ground that nothing falls outside the province of health and medicine….”

What makes this confusing is that the high priests of these beliefs shroud themselves in the trappings and seeming infallibility of “science.” I have no complaint with science. I do have a complaint with Big Pharma pretending they are using science while criminally pushing 76 billion opioid pills into the United States in a short six-year period. That and other “here’s-a-pill-for-every-problem” actions stem from a mindset, a philosophy, a view of humanity that devalues the spiritual and says that all problems are merely physical. That view is what I mean by the “secular religious ideologies.”

One doesn’t have to become paranoid, one doesn’t have to see a Martian behind every bush, to recognize that a tremendous amount of money is spent to influence us. At the same time, very little is pushed to encourage us to decide for ourselves, to determine our own lives.

Anyway, back to something more pleasant—the chocolate chip cookies.

I don’t know the name of the person interviewed this morning, but the subject of the story was the wonderful research being done on how certain odors, when used in stores, can positively or negatively affect customers.

Some smells made customers stay longer. Others had them fleeing the premises. The research also found odors needed to be appropriate—the smell of fish in a leather store, for example, probably wasn’t going to lead to higher pocketbook sales.

The expert further acknowledged that customers didn’t like it when they couldn’t tell where the smell originated. (For example, an otherwise pleasant floral order, without having flowers visible, wasn’t appreciated.)

There’s something both obvious and repugnant about this kind of discussion because it is all about how to control others, particularly in ways the targets won’t suspect or notice.

This is not a new thing in the world today. Honestly, we regularly see news and documentaries about the large forces hard at work developing ways to manipulate and control. I would challenge you to listen to news about social media or more generally about Big Data or reports of the latest “psychological study” and try as an experiment to evaluate them against this simple question: “Is this about a way someone is trying to control someone—control me?”

One doesn’t have to become paranoid, one doesn’t have to see a Martian behind every bush, to recognize that a tremendous amount of money is spent to influence us. At the same time, very little is pushed to encourage us to decide for ourselves, to determine our own lives—unless it’s part of a marketing strategy that tells us that by buying their product, we will help ourselves control our own lives better.

So, if this kind of story is so common, why did the conversation about chocolate chip cookies jump out at me this particular morning?

Because of its juxtaposition with a book I’m reading, Dianetics: The Evolution of a Science, written by L. Ron Hubbard nearly 70 years ago. The book traces the line of research and investigation Mr. Hubbard travelled to arrive at Dianetics—a science of the mind which later blossomed into the religion of Scientology.

On that path, one of his key discoveries about when and how people make bad decisions or struggle in life is simply stated: “When exterior determinism was entered into a human being so as to overbalance his self-determinism, the correctness of his solutions fell off rapidly.”

In other words, the more we’re controlled by forces in the exterior world that overthrow our self-determinism, the worse we do.

There’s a lot of money, an avalanche of TV ads and even the odor of some of our favorite things being pushed our way in a calculated effort to unwittingly control us into buying, doing or taking something.

Scientology is built around the concept that each individual is unique, each valuable, each capable of great creativity, compassion and care. That orientation began at the genesis of what has become the global Scientology movement and is reiterated and expanded throughout its texts, its activities and the views of individual Scientologists, who live and work in communities around the world.

Scientologists believe that increasing an individual’s self-determinism and freedom is the only way to truly help him or her. Scientologists believe that accomplishing that, the individual becomes more himself and, happily enough, also more ethical, more capable and more able to create the life he or she envisions. Self-determinism does not mean “self-serving.” It does not mean “other-deprecating.” Helping someone to become freer does not require making others less free—in fact, quite the opposite.

For Scientologists this isn’t a theory, a nice-sounding concept with no path to travel to achieve it. Having recently completed a course in Scientology which focuses on recovering self-determinism and weeding out those uninspected influences that undermine it, I have recently glimpsed the power of helping the individual become him or herself.

There’s a lot of money, an avalanche of TV ads and even the odor of some of our favorite things being pushed our way in a calculated effort to unwittingly control us into buying, doing or taking something.

I will always love the smell of warm chocolate chip cookies. But when it comes to how I’d like to live my life and the world in which I’d like to live it, I’d rather not have that love corrupted by philosophies bent on finding new ways to hide their attempts at control.

KEYWORDS
FREEDOM SCIENCE AND RELIGION SELF-DETERMINISM
AUTHOR
David Aden
David is a software engineer, father of two sons and grandfather to six grandchildren. He has worked in and written about high tech for more 25 years and currently lives and works in Clearwater, Florida where he volunteers time to various community programs.
THE STAND BLOG
HATE WATCH
Game Show Network: Bigotry Is No Game
HATE WATCH
Why Political Operative Ace Smith Is the True Loser in the L.A. Mayoral Race
HATE WATCH
Why the People of Los Angeles Are Disgusted by Ace Smith
FEATURED ARTICLES
RELIGIOUS FREEDOM
Why God Is Love and We Should Love All People of All Faiths
By David Aden
TOLERANCE
Faith Communities Come Together to Pay Tribute to Queen Elizabeth II
By David Aden 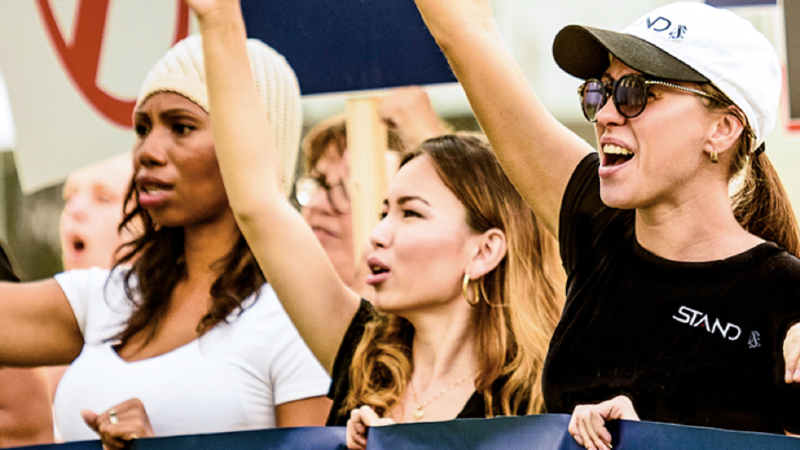 BLOG | TOLERANCE
I’ll STAND Up for You
BLOG | COMBATING BIGOTRY & HATE
Do You Have an Obligation To Protect All Our Freedoms?
BLOG | RELIGIOUS FREEDOM
Freedom is Just Freedom