Terrorists are Insane, Not Religious

I think of myself as very fortunate. I have traveled around the world since I was a teenager and I have met thousands of people who enriched my life and taught me that we are all part of the human family, and the great majority of us share similar desires and hopes and an aversion to violence and war, regardless of our skin color and religion.

Sadly, since the tragedy of 9/11, anti-Islamic sentiment has grown internationally. It has been further fueled by vicious acts committed by individuals who claim to be Muslims. I very much understand the gut reaction felt by Americans and others around the world upon seeing the heartbreaking images playing over and over on their TV screens. But I also know that when most people are allowed time to process a terrible event, they come to understand the truth of it; terror, mayhem and violence are committed by insane people, not religious ones.

I remember seeing a French news segment that showed Muslims in Palestine in solidarity with America crying while placing flowers on sidewalks after the attacks. I also remember seeing U.S. news footage of a group celebrating in one area of Khan Yunis, Palestine. To my knowledge, no American news station ever aired the shots of Palestinians crying for American lives. This was eye-opening for me and led me to the inevitable conclusion that the American media has a hidden agenda to create divisions between nations and religions.

Then there is real life experience. I first started working with Muslims when I traveled to Bangladesh to teach human rights a few years ago and spent the majority of my time with college students there.

What struck me most was the desire of the young men I met to see human rights become a reality for women, and for members of minority religions there like Hindus and Christians. Within three months of starting my work in Dhaka, we counted over 600 new volunteers delivering seminars on human rights. The movement grew rapidly, validating my idea that most people are good, and simply want to be happy and wish the same for their fellow man.

Those who maintain that Islam is a violent religion and quote certain passages of the Quran to support their views conveniently forget that there are many passages in the Bible that advocate violence. Yet, this doesn’t make Christians a violent people, any more than the violent passages in the Quran make Muslims terrorists.

Another interesting fact, widely ignored by the American media, is that the great majority of terrorist attacks are committed in Islamic countries. In 2015 alone, 83 percent of all such attacks were on Muslim soil.

Many murderers around the world have claimed to kill in the name of Christianity: murderers Paul Jennings Hill, John Salvi and Eric Rudolph were all members of the Army of God; the Lord’s Resistance Army founded by Joseph Kony was responsible for thousands of killings in parts of Africa; and the National Liberation Front of Tripura, a paramilitary group claiming to uphold Christian values kills and tortures Hindus in India.

Members of these blood-thirsty groups are not Christians, any more than those who perpetrated the attacks on the Twin Towers, at the Boston marathon, or in Nice, France, are Muslims. These murderers are rightfully denounced by Christians who know that killing is against the teachings of their religion. As a society we recognize the truth of this, yet some of us seem unable to apply the same logic to those who commit acts of terror in the name of Islam.

Why does the media label Dylan Klebold (one of the shooters at Columbine High School) “mentally unstable,” but call Dzhokhar Tsarnaev (the Boston Marathon bomber) a Muslim terrorist? Muslims are forbidden to drink alcohol or take drugs and yet Tsarnaev drank alcohol and smoked marijuana. This alone makes it obvious that he didn’t follow the teachings of Islam.

According to the Bible, Matthew 5:38-39, 43-44, “You have heard that it was said, ‘you shall love your neighbor and hate your enemy.’ But I say to you, love your enemies, bless those who curse you, do good to those who hate you, and pray for those who spitefully use you and persecute you.”

The great majority of us desire peace and understanding and reject those who would spread mayhem and chaos. Let’s ensure we do not blindly accept the headlines of a media that thrives on the dangerous and unsafe environment it “depicts.”

So, no there is nothing holy about violence and the desire to kill others. It is insanity.

The great majority of us desire peace and understanding and reject those who would spread mayhem and chaos. Let’s ensure we do not blindly accept the headlines of a media that thrives on the dangerous and unsafe environment it “depicts.” We must start by realizing that a few insane men who claim to be Muslims do not represent 1.6 billion actual Muslims. After all, none of us would assert that Joseph Kony is really a Christian and that 2.2 billion Christians around the world are now a danger to the rest of us. 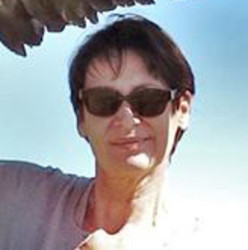 Sandra Lucas
When not working stateside as a business owner, Sandra Lucas travels the world and teaches human rights to students, military personnel and police.
THE STAND BLOG
RELIGIOUS FREEDOM
Honoring Those Who Faced Death to Secure Our Religious Freedom, This UN Day Against Torture
COMBATING BIGOTRY & HATE
Shoulder to Shoulder Panel Shows Us Why People of All Faiths Must Confront Islamophobia
SCIENTOLOGY RELIGION
Scientology Made Me a Better Dad—But You Wouldn’t Know It If You Believed the Bigots
FEATURED ARTICLES
RELIGIOUS FREEDOM
The Founders’ Creator—Islam, the First Amendment and Religious Freedom
By Imam Talib M. Shareef
RELIGIOUS FREEDOM
Why My Religious Rights Are Being Threatened in Los Angeles County Superior Court
By Bishop L. J. Guillory
RELIGIOUS FREEDOM
Why All People of Faith Must Cherish and Protect the First Amendment
By Soraya Deen
RELATED ARTICLES
BLOG | COMBATING BIGOTRY & HATE
Reza Aslan: A Wolf in Sheep’s Clothing
BLOG | SCIENTOLOGY RELIGION
Is Man Just Another Animal? Part 2: Loss of Spirituality and Increase of Dementia
BLOG | RELIGIOUS FREEDOM
Leave “Islamic” Out of It