The concept of responsibility is at the core of personal freedom. For centuries and across cultures it has been believed that the proper answer to an affront or a transgression is retribution. As Scientologists, we believe that this could not be further from the truth.

The proper response to a transgression or a crime is to rehabilitate the offender. Punishment does not work and only represses the offender into a lower, more degraded state of existence. And this benefits no one.

The path of vengeance is paved
in blind, smoldering hatred.
A traveled road, lined with damned souls
set to fall like dominoes, one against the other.
It does not end
until all lie writhing in the dust.

A hot, dry wind is all that remains
at the end of this path. A wind
which carries no joy
no satisfaction.

“An eye for an eye” is a crime committed by translators
in thrall to those thirsting for blood and
for self-serving tumult; translating
for the convenience of those who live to wage death.

The proper reading should be:
“For an eye that is taken, an eye should be replaced.”

An eye for an eye.

A life for a life is a far more complex proposition.
It is not true that death, as a solution
is never warranted. But vengeance
begets naught but vengeance.
A repetition of itself, as a round sung
in an unholy song; voiced
in an eternally minor chord.

No life. No happiness.

The appearance of satisfaction, real only to he
whose gaze is fixedly inward.
He who dances alone in his murderous—“I told you so”—existence.

He is a mote of dust in a barren, soulless
empty land which bears no solace.

You would justify your pain
by adding to the universe, more pain?
You ignorant, self righteously arrogant child!

You would justify your existence by the death of those
into whose eyes you’ve never looked!

Justice is a more difficult job.
It is not as easy as killing.
Violence is only done where fear is first present.
Vengeance begets only death and vengeance.
It does not balance the scale.

But you knew that from the beginning
and did not care; bearing the rage-fueled seed
which is nurtured only by the compulsion to inflict pain.

If you want true justice:
Get those who created your pain
to understand, and face without denying, the
horror of their acts; and then to make
effective and acceptable amends.
By their own choice.
By their own hand. 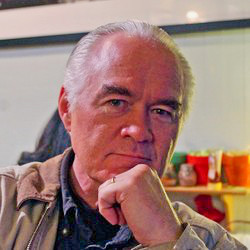