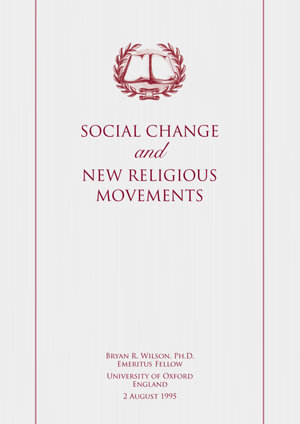 In this article, originally published in 1995, Professor Bryan Ronald Wilson surveys social challenges facing new religious movements, in particular the problem of intolerance. As a new religion becomes older, it tends to attain a greater degree of acceptance within society because it is considered less different or deviant. In the case of the Church of Scientology, Dr. Wilson contends that it “may arouse suspicion” because its theology, practices and culture are sometimes at odds with forms of religion (typically Judeo-Christian) in Western societies. Numerous examples are outlined, including the affirmation in the Creed of the Church of Scientology that humanity is inherently good, rather than sinful or depraved. “In a rapidly changing world, in which social institutions are all in flux, to religion alone is ascribed a continuing and theoretically unchanging role, function, and form,” Dr. Wilson writes. “Yet the evidence is that considerable numbers of people are seeking, and finding, new patterns of religious practice and new conceptions of religious truth, engaging in new spiritual quests, and participating in new types of religious organizations.” The Church of Scientology, certainly, is one such new religion, based on its unparalleled expansion and testimonies from its parishioners on the benefits of Dianetics and Scientology experienced on a daily basis.

What is the International Association of Scientologists?

How are Churches of Scientology supported financially?

How much might a Scientologist donate before achieving the state of Clear?

Is the Church profit-making?