Scientology, Social Science and the Definition of Religion 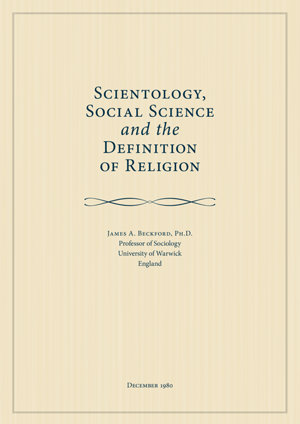 By James A. Beckford, Professor of Sociology, University of Warwick, England

In this brief article from 1980, Professor James A. Beckford examines the ways in which Scientology amply satisfies traditional social-scientific definitions of religion. These include functional definitions (those that focus attention on how religions operate individually and socially) and substantive definitions (those that focus on specific properties by which a religion may be identified and differentiated from non-religion). “My conclusion,” writes Dr. Beckford, “is that Scientology, whilst clearly differing from the majority of Christian churches, denominations and sects in beliefs, practices and organisational structures, nevertheless satisfies the criteria conventionally applied by social scientists in distinguishing between religion and non-religion.”