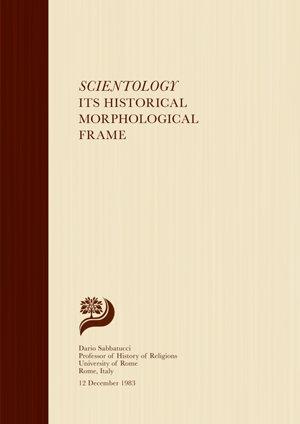 By Dario Sabbatucci, Professor of History of Religions, University of Rome

In this article from 1983, Professor Dario Sabbatucci puts the history and theology of Scientology in morphological context with reference to Buddhism, Christianity, Christian Science, Bahá’í and Hinduism. In this regard, Dr. Sabbatucci focuses his attention on Scientology doctrines and ritual practices. “The present report,” he explains, “is aimed at answering the question of whether, in historic-religious scientific terms, Scientology should be considered as a religion under all circumstances…. In conclusion, what makes Scientology recognizable as a religion is first its resemblance to other religions (already established in this report). Further, and especially in light of the Western distinction between the ‘civic’ and the ‘religious,’ everything which is said or done in Scientology can and must make sense in our culture only if understood as a religion.”