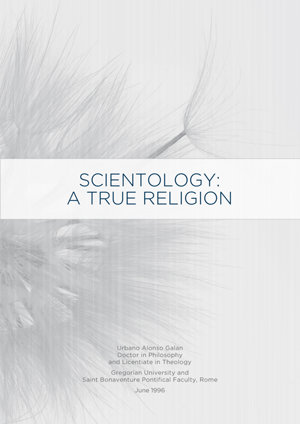 By Urbano Alonso Galan, Professor of Philosophy and Theology, Gregorian University of Rome

In this article, originally published in 1999, Dr. Urbano Alonso Galan outlines—“in an objective and scientific view of the matter”—four aspects that demonstrate Scientology’s rich and inherent religious nature: philosophy and doctrine, ritual, ecumenical orientation, and a final purpose or objective in terms of salvation. Dr. Galan’s analysis is all the more powerful due to its theological comparisons of Scientology with other religious traditions, such as Buddhism, Hinduism, Christianity, Islam and Judaism. In the final analysis, he concludes that “From my viewpoint as a theologian and philosopher, and having studied the religion of Scientology in its writings and practices, I can strongly affirm that Scientology is a religion, in the very fullest sense. … The roots of Scientology (Buddhism and the Vedas) already point out that one can only through a complete knowledge of oneself commence to know and love God.” This is made possible by Scientology auditing and training, which allows the individual to gain greater knowledge and certainty about the place of one’s self in relation to other features of life known to Scientologists as the Eight Dynamics. These dynamics encompass impulses toward survival in terms of (1) self, (2) family, (3) groups, (4) species, (5) life forms, (6) the physical universe, (7) spiritual universe, and (8) infinity, commonly referred to as God or the Supreme Being.