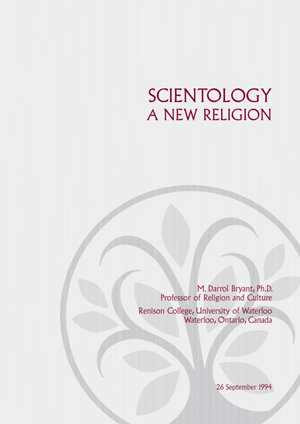 In this article, originally published in 1999, Professor M. Darrol Bryant presents an analysis and review of Scientology as a new religion in its historical, social, cultural and, of course, theological contexts. This includes comparisons with other religions, namely Buddhism and Christianity. Specifically, Dr. Bryant addresses two questions: (1) Is Scientology a religion? and (2) Are Scientology churches places of worship? In both instances he concludes in the affirmative, based on a nuanced analysis that displays familiarity with Scientology theology, literature written by other scholars, and definitions of religion: “In light of this review of Scientology in relation to the elements of the modern scientific definition of religion, it is apparent that Scientology is a religion. It has its own distinctive beliefs in and account of an unseen, spiritual order, its own distinctive religious practice and ritual life, it has its own authoritative texts and community-building activity…. In the light of this review of Scientology practice and activity, I conclude that Scientology does engage in worshipping activity, as worship is understood in the modern study of religion, in their places of worship. The activities of Scientologists in their places of worship fall into the range of patterns and practices found within the religious life of humankind.” These places of worship consist of over eleven thousand Churches, missions, and affiliated groups in nations all over the world, with new Churches regularly opening to provide services to all of humanity—whether that be through Dianetics, Scientology, or global social betterment and humanitarian programs.

Did L. Ron Hubbard make a lot of money out of Scientology?

Do Scientologists believe that L. Ron Hubbard was like Jesus Christ?

How can one improve their life just by reading a book?